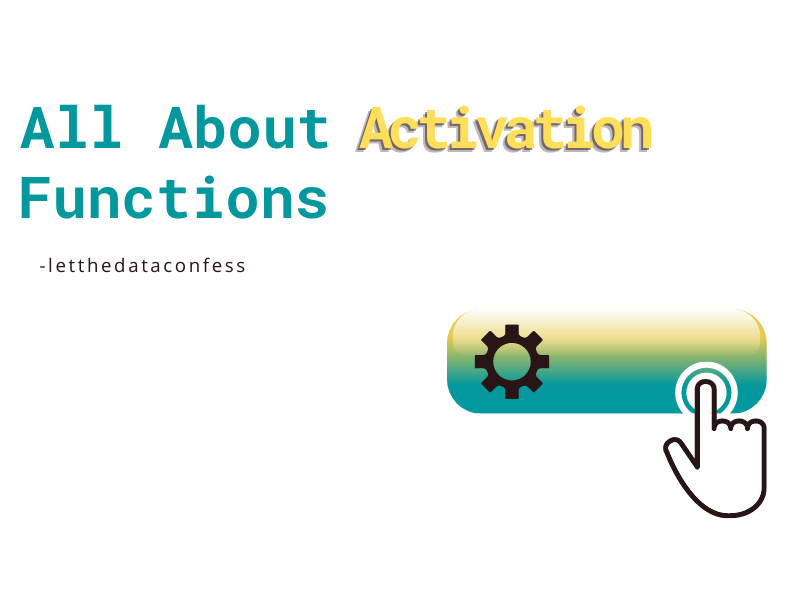 What does it mean by activation function?

Just think, how does a neural network decide which class has to be predicted for a particular problem.

In a neural network, all data is coming in from the input side and you need to decide which data you have to let go out. So, how to do that?

Activation Function helps you do that.

The activation function is a kind of gate for the neural networks which decide the output of the model.

Okay! So, we understood what activation function means?

So, let’s check out different types of activation functions.

For e.g. If you want to predict if it’s going to rain today or not?

“If this particular image belongs to cat or not” (binary classification)

The most important thing in a neural network is “feedback”. Using feedback only, the output may be improved or accuracy can be increased. To incorporate a feedback mechanism, we need to apply a gradient descent algorithm. For that purpose, the derivative of the activation function is needed.

If you calculate derivatives of the binary activation function, the derivative is not dependent on the input. It means you won’t be able to figure out which input can provide a better prediction.

The linear activation function creates output in such a way that output is proportional to the input.

It is not limited to binary output but can be used for multi-class classification.

As non-linear activation functions are capable of mapping complex features to output.

Let’s discuss some of the non-linear activation functions which are most widely used:

The sigmoid function transforms the output between 0 and 1. It is helpful where prediction is required in the form of probability.

E.g. Multi-class Classification. In such cases, we just need to predict the probability of a class.

It is similar to the Sigmoid function except that it can take both positive and negative values because it is symmetric around the origin.

Usually, the ‘Tanh’ function is preferred over ‘Sigmoid’ as it’s symmetrical around the origin.

ReLU stands for Rectified Linear Unit. It works in such a way that it does activate only a few neurons at a time. Negative neurons will be set to zero and output will be proportional to positive neurons.

Though Relu is computationally efficient still it has a problem that it makes all the neurons zero which are negative.

So, for its solution “Leaky Relu” came as its alternative.

To deal with the negative neurons, parametric ReLU takes the slope of the x as its argument.

It normalizes the output of given classes between 0 to 1, divides the output with the sum of given probabilities, and gives the probability of particular classes accordingly.

The softmax function is widely used for neural network training in the output layer (sometimes used as a fully connected layer) as it gives the probability for multiple classes.

It is a recently discovered function by Google which is a self-gate-activated function.

Let us know through the comments if you found it useful.