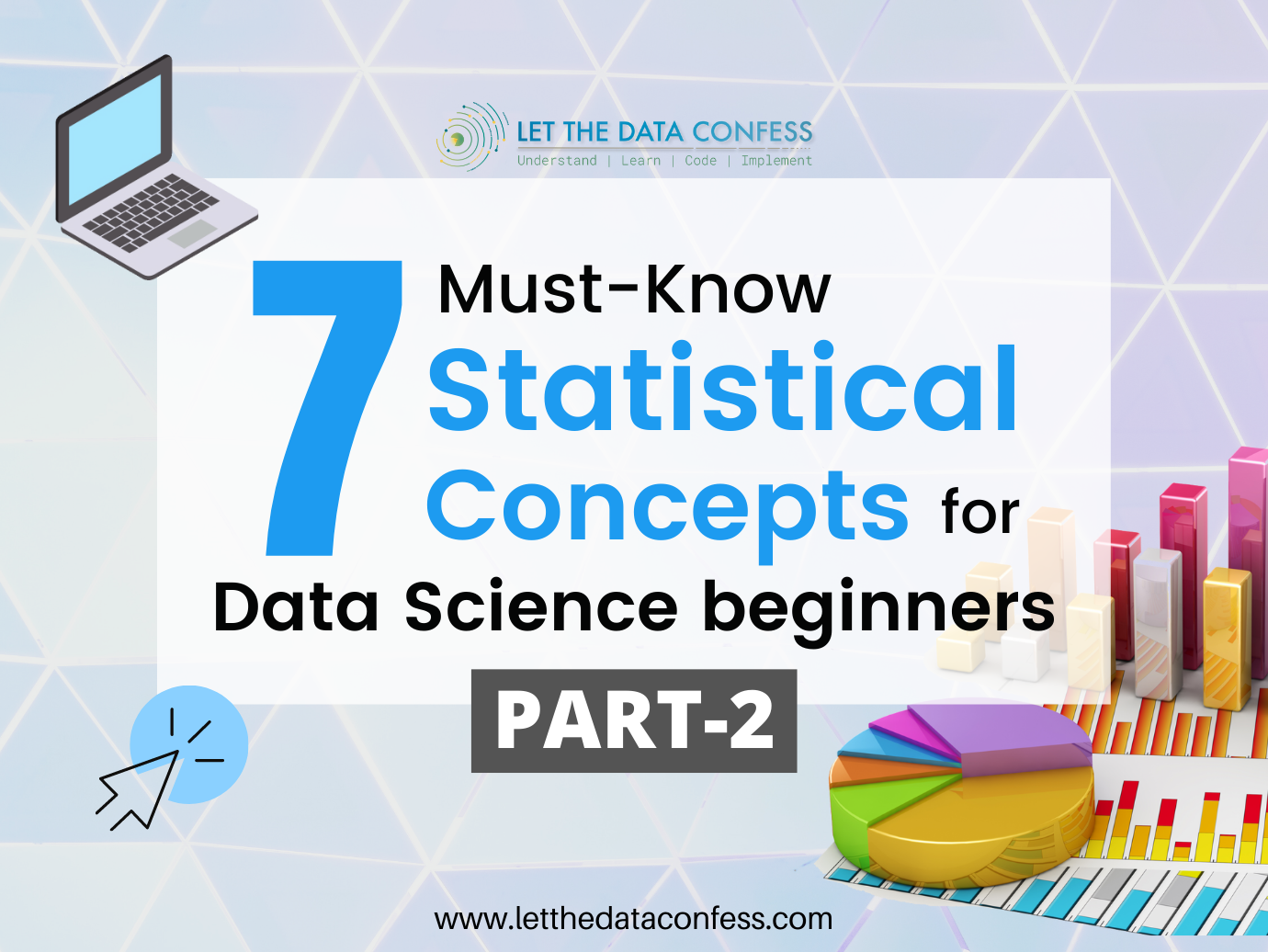 Hey! Did you read the 7 must-know Statistical Concepts for Data Science Beginners (Part 1)? If you haven’t read it yet, visit here.

Well, if you have read it, welcome to Part 2. In this second part, we’ll be discussing the remaining must-know statistical concepts for Data Science Beginners. These concepts will boost your confidence in understanding Data Science.

So, without wasting any time, let us hop onto it.

Inferential statistics is a way of making inferences about populations based on samples. It is often used to compare the differences between the treatment groups.

A Hypothesis Test evaluates two mutually exclusive statements about a population to determine which statement is best supported by the sample data.

Null Hypothesis: Null hypothesis is a statistical theory that suggests there is no statistical significance exists between the populations.

Alternative Hypothesis: An Alternative hypothesis suggests there is a significant difference between the population parameters.

Level of significance: Denoted by alpha or α. It is a fixed probability of wrongly rejecting a True Null Hypothesis.

Do not feel exaggerated! Let us break it piece by piece through a real-life example. Suppose we take sugar with a label of 500 grams. We assume the statement to be true. Thus, it is assumed to be true (based on the given label) that the canned sauce weighs 500 gm. However, we want to do hypothesis testing to ascertain that the label mentioned as 500 gm is true because there is a claim that sugar packets consisted of 480 gm.

We then perform a test like a Two-Tailed Z-test with a certain confidence and find the critical value.

Now we need to ascertain which of the statements is indeed true. We use P-value for that. It is the proportion of samples (assuming the Null Hypothesis is true) that would be as extreme as the test statistic. It is denoted by the letter p.

If the p-value is greater than the level of significance, we fail to reject the Null Hypothesis.

If the p-value is greater than the level of significance, we reject Null Hypothesis.

You can refer to this research article on Hypothesis Testing.

F-test is used to compare two variances. It is used to determine whether or not the two independent estimates of the population variances are homogeneous in nature. A result is always a positive number (Since variance is always positive).

For example, let’s suppose that there are two sets of watermelon under experimental conditions. The researcher takes out a random sample of sizes 9 and 11. The standard deviations of their weights are 0.6 and 0.8 respectively. After making an assumption that the distribution of their weights is normal, the researcher conducts an F-test to test the hypothesis on whether or not the true variances are equal.

A t-test is used to determine if there is a significant difference between the means of the two groups. It helps us determine if the two sets came from the same population. It can be used when the dataset follows the normal distribution with unknown variances.

A chi-square statistic is a test that measures how a model compares to the actual observed data. It is often used in Hypothesis Testing.

Chi-square can be used to test whether or not two variables are independent of each other. It is also called the ‘Goodness of fit’ test. ‘Goodness of fit’ is a way to test how well a sample of data matches the characteristics of the larger population that the sample is intended to represent.

It is mostly applied to categorical variables. For example, a scientist wants to know if education level and marital status are related to all people in a country.

Before its formal definition, let us take an example. A group of psychiatric are trying three different therapies: counseling, medication, and biofeedback. You want to see if one therapy is better than the others, then you will use the ANOVA test. It checks the impact of one or more factors by comparing the means of different samples and gives you the result.

Two-way ANOVA is appropriate when the experiment has a quantitative outcome and you have two categorical explanatory variables.

Bayes’ Theorem is at the heart of probability and one of the most fundamental concepts for Data Science. Can you tell the risk of lending money to any potential borrower? Bayes’ Theorem can help you with that.

Naive Bayes’ Algorithm is one of the most widely used algorithms in Machine Learning. It uses Bayes’ Theorem only t predict the output.

So this blog summarized all the important statistics topics for data science with the reasons.

If you are looking for understanding these topics in detail, you can refer to some books. But there are a lot of books available. That’s why we have curated the 10 best statistics books for data science enthusiasts. You can check them out here.